Soft fruit specialist Hortifrut has reported strong first quarter results, with EBITDA reaching US$25.07m, an increase of 49 per cent on the year-earlier period.

The company said the rise was mainly due to better sales prices and a decrease in operating costs and other expenses.

Additionally it said it was able to weather the worst of the Covid-19 crisis in China by using its extensive network of markets and clients to redistribute fruit destined for Chinese market during the height of the outbreak in January and February.

Operating costs for the quarter totalled US$151.49m, a fall of 20.53 per cent on the year-earlier period.

The lower costs helped to compensate for a fall in the volume of Peruvian berries marketed in the first quarter of this year, which was due to the company’s early pruning strategy to prevent significant overlap with Chile and ensure a better production curve for the 2020/21 season.

Sales volumes fell by 16.9 per cent compared with the same period of 2019, however, this was partially offset by an increase in the average price per kilo of 9 per cent.

Among the major milestones achieved in 2019/20, Hortifrut cited its acquisition in February of a non-majority stake in Portugal’s BFruit. All of BFruit’s production (mainly raspberries) will be marketed through Hortifrut’s European trading platform.

The deal will also allow the company to carry out faster commercial scaling of new varieties of raspberries, blackberries and blueberries from its own varietal development programmes around the world.

Regarding the company’s growth strategy, Hortifrut said the deal it reached with Alifrut in October 2019 to globally combine and develop exports of frozen products would allow the company to “further consolidate and strengthen its leadership position as a global business platform by complementing its offer of value-added products”.

In terms of its Covid-19 strategy, Hortifrut noted that it had adopted all necessary measures in order to maintain its commitment to continuous, year-round supply and protect the health of its workers. 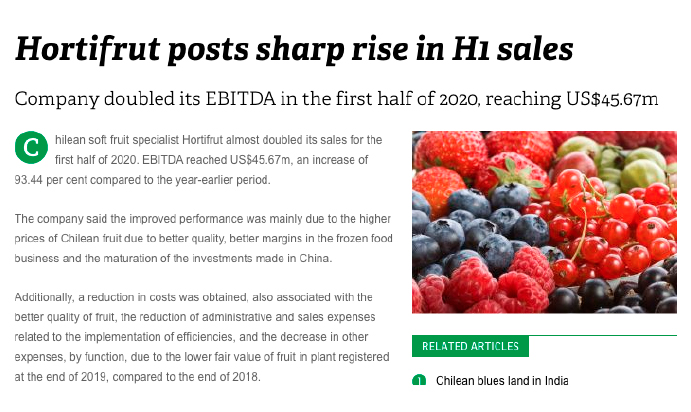 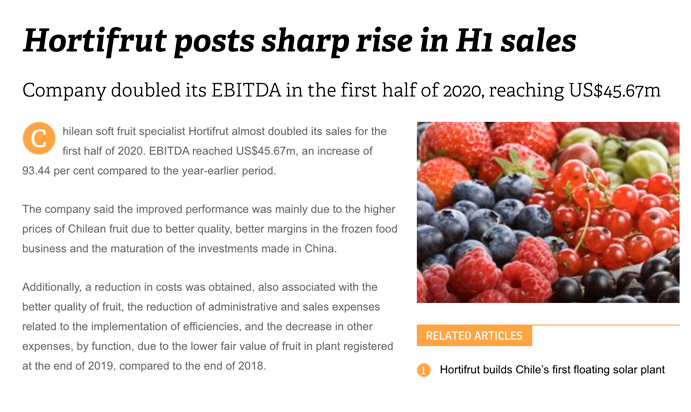 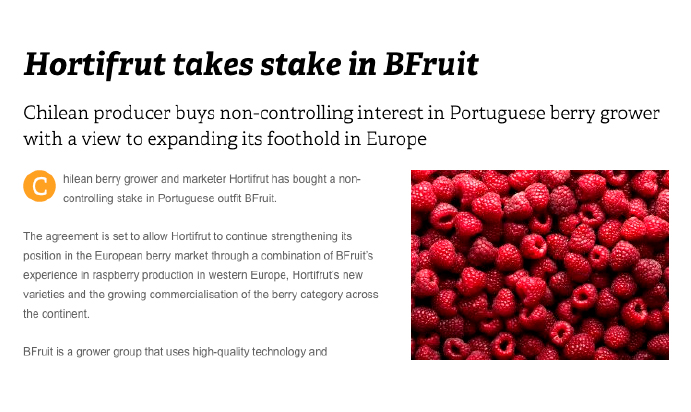